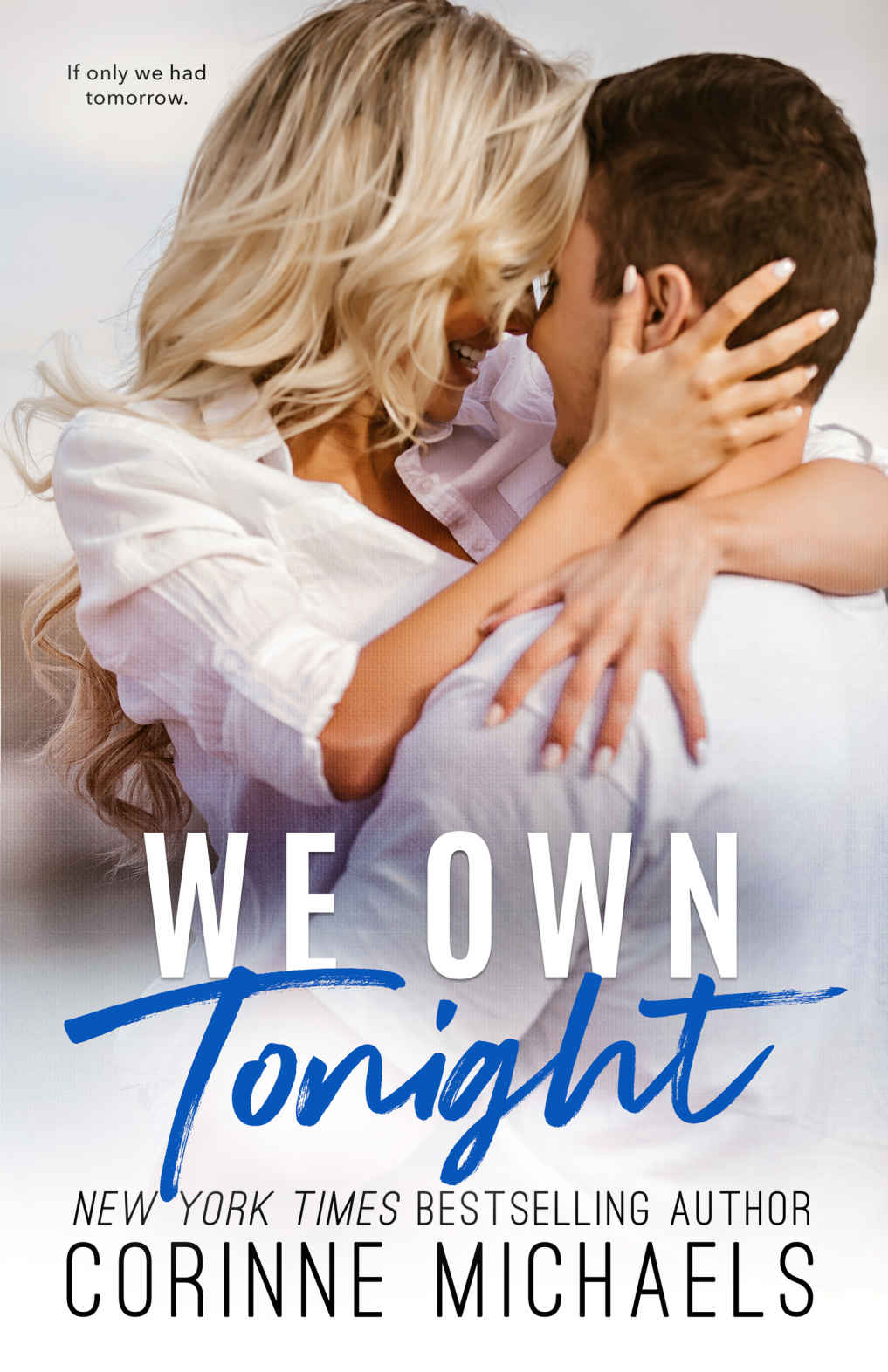 I’m not a one-night stand kind of woman. I’m especially not the woman who has a few drinks at a concert and ends up in bed with my childhood celebrity crush, Eli Walsh.

However, that’s exactly where I find myself.

What’s a girl to do after a drunken mistake? Run. I grab my clothes and get away from the powerful, irresistible, and best-sex-of-my-life superstar as fast as I can. His gorgeous green eyes, rock-hard body, and cocky smile have no place in my world. My life is complicated enough.

Someone forgot to tell him that.

Eli is relentless. Pushing his way into my heart, wearing me down, proving he’s nothing like I assumed, and everything I need. But when my world shatters to pieces, he holds the broken bits together. Unwillingly, I fall desperately in love with him.

He made me think we’d have forever . . . I should’ve listened when he said we could only own tonight.

We get back to the front row as the boys are playing one of their older songs. I don’t know why they play the new stuff. Really, no one cares. We want to pretend we’re still thirteen singing into our hairbrush microphones.
“All right, ladies,” Randy croons. “It’s that time. We’re going to take it down a notch. Maybe find that girl who only comes around once?”
My favorite song ever.
Eli walks around the stage, smiling and pointing to random women. “I feel like I need to sing to someone this time, Ran.”
Randy smirks. “You need some inspiration, brother?”
Eli continues to walk around while tapping his chin. “I need a girl who’s going to be mine. Are you her?” he asks the crowd.
People scream, jump around, and wave their hands frantically. I move behind Nicole, just in case . . . because I would rather take a bullet than go up there.
He comes around the stage and stands in front of me. His green eyes sparkle with mischief as they land on me.
He points. “You,” his voice sizzles as he stares at me.
Fuck my life.
All the blood rushes from my head. No. No way. I vaguely hear the screams around me, but I can’t move. I shake my head in protest.
Eli’s finger hooks as the bouncer comes around. “Come up here, sweetheart.”
“No,” I whisper as Nicole pushes my back forward. “I can’t.”
“You’re so going.” She thrusts me forward, and the bouncer pulls me over the rail.
I look up as Eli stands with his hand out. “Will you be my once in a lifetime?” he starts to sing the lyrics.
My heart races as I place my fingers against his palm. I pray to God I can keep myself from passing out. I’m on stage with Four Blocks Down.
Breathe, Heather, I tell myself as he walks me around while singing.
“You’re the only girl I see.” Eli hits each note. His hand doesn’t release mine as he begins to sway. This was the song that I always imagined him singing to me. “I want to wake up next to you.”
Oh, Eli . . . if only. I feel the heat burn my cheeks. What the hell is wrong with me?
Eli sits me in the chair on stage. Thank God, because I may hit the deck. I say a silent prayer for the bright lights that obstruct my view into the audience. At least I can’t see my friends doing who knows what. Or my co-workers. He kneels in front of me, holding my hand as if he were proposing. I can’t feel my extremities. I’m shaking, and it isn’t from being cold. “Will you be my once in a lifetime?” he asks again.
I know this is the damn routine.
I’ve seen them in concert at least four times, twice in high school and twice in college, but I’m completely lost to him. There are over twenty thousand fans here, but in this instant . . . it’s him and me. A girl can dream.
His hand brushes against my cheek as he hits the final note. He helps me stand and then pulls me close. “Don’t go anywhere after the show,” he whispers in my ear.
I pull back and look in his deep green eyes waiting to hear: Just kidding. But it doesn’t come.
Holy shit. He just asked me to stay? I’m being Punk’d. Seriously, where is the camera crew waiting to jump out at me?
The next song begins as the bouncer helps me back over the rail.
The girls attack me with their screams and flailing arms. I can’t speak. I don’t even know if I can breathe.
Nicole steps in front of them and holds my shoulders. “In and out, Heather.”
I focus on inhaling and shake my head. “What the hell just happened?” My mouth hangs open.
“Well . . .” She grins before continuing, “You were serenaded by the hottest guy ever.”
They ask me a million questions about what it felt like. The only thing I can say is: “Surreal.” It was freaking surreal. I would never believe that actually happened if they hadn’t shown me the video on their phones. Every glorious second is documented. I can see my face is flushed, my eyes wide, and I’m pale. Great. I look up, hoping he hasn’t seen me and my friends freaking out, but his back is to us as he sings to the other side of the arena.
I think about what he whispered to me. Did he want me to wait—for real? And why? Maybe he wants to give me a signed souvenir? It would make sense. Embarrass the fuck out of some girl and then give her an autographed T-shirt.
“Nic,” I call her over because there is no way I’m not telling someone.
“Yeah?”
“He wants me to wait after the show,” I yell in her ear.
Her face brightens. “No way!”
“It’s got to be a misunderstanding, right?” I ask.
“Or he wants you.”
“No!” She’s on crack. There’s no way in hell he “wants” me. That’s dumb.
“He already knows you love him.” She smirks.
“Whatever. There’s no way I am going to wait.”
“The hell you aren’t!” Nicole crosses her arms. “We’re staying. We’re going to find out what Eli Walsh wants because you’d be an idiot not to.”
Yeah, I’m an idiot all right—not because I don’t want to meet him but because I do. Very much.