Here is an EXCLUSIVE Sneak Peek of If I Only Knew which is releasing January 28, 2019. You can preorder on Amazon, iBooks, Nook, Kobo, and Google Play. It’s available right now on Audible if you want to listen! I hope you enjoy meeting Danielle and Milo! It’s definitely one of my favorite books I’ve ever written. 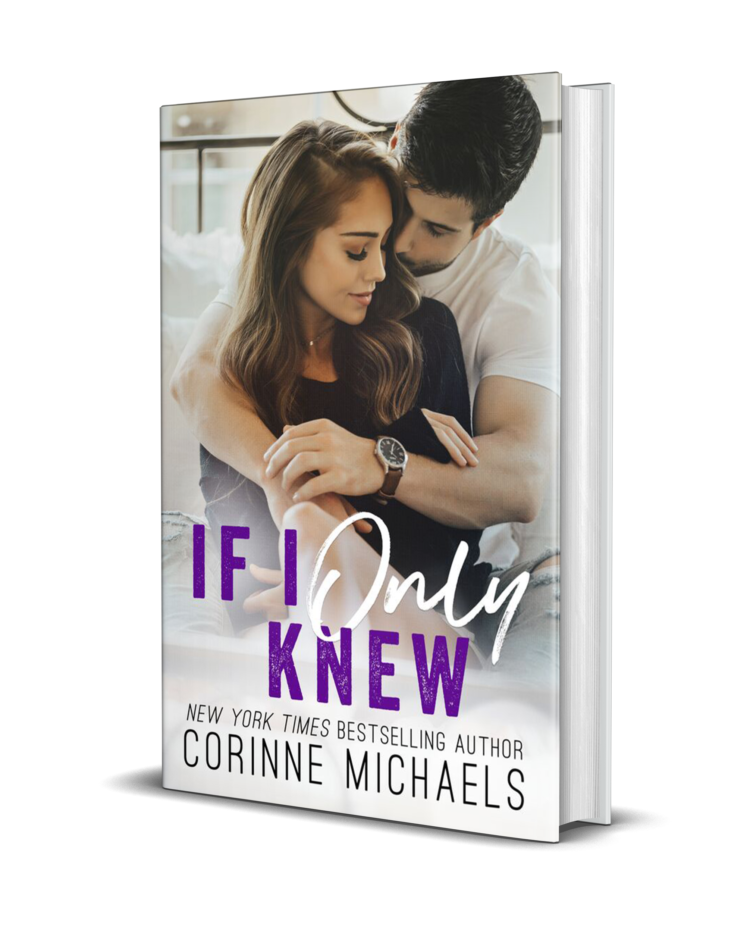 “I’m getting married!” My sister, Amy, screeches into the phone as I’m driving home from grocery shopping.

“What?” I ask, almost veering off the road.

“Javier proposed, and I said yes!”

My sister is the last person in the world who should be getting married. First, she’s never had a job, paid a bill, or been a contributing member of society. Second, I’m pretty sure her now fiancé . . . is gay.

“Javier picked out the most amazing ring, Danni. Like, it sparkles in the light and sends these rainbows everywhere when I move. Oh, and he wants to get married in a month!”

She sighs, and I picture her staring at her ring. “He thinks it would be better to do it now instead of waiting.”

I roll my eyes and bite my tongue. Today isn’t the day to have an opinion on this. She’s clearly excited and nothing good will come of me telling her that he doesn’t love her, and there’s some ulterior motive—like a green card.

So, for now, I’ll be the good sister and keep my trap shut.

“Well, I love you and I know Peter and the kids will be excited,” I say, staring at the traffic ahead of me.

I look at the clock and start to worry a little. I have to get my fifteen-year-old hellion daughter, Ava, and my sweet five-year-old son, Parker, from school in twenty minutes. Plus drop this stuff back at home so all my frozen food doesn’t thaw. My thumb taps on the wheel as I barely move an inch.

I swap the call over, thankful that I can stop trying to pretend my sister is making an even halfway decent decision. I love her to the moon, but she lives in the stars. Peter and I have never understood her. “Hi, babe. I can’t wait to tell you my sister’s latest bullshit. She’s getting married to that idiot! Can you even believe that? How dumb is she?”

“Yes? Who is this?” I ask when it’s not my husband’s voice on the other end.

The male clears his voice. “This is Officer VanDyken with the Tampa Police department.”

My heart starts to race and my throat goes dry. “Is everything okay?”

“Ma’am, I’m going to need you to come down to the station.”

A sense of dread fills my veins. Peter works with some shady people and there have been times when he’s done some things that I’ve thought were a little weird, but he says it’s for the protection of his clients.

He tells me the address and I make a quick U-turn to head that way. I have no idea if Peter is in trouble, but I range from worried to pissed off. I hate his job. It was part of the reason we almost divorced three years ago. Well, that and Parker, who unexpectedly graced us with his presence and sent our lives into a tailspin.

I send a quick text to my best friend, Kristin.

Me: Can you get the kids? I just got a call from the TPD asking me to come down. I have no idea what happened but I’m freaking out because I won’t make it to pick them up.

Kristin: Of course. I have to get Finn and Aubrey anyway, I’ll swing and grab them.

Kristin: Is he in trouble or arrested?

That’s the question of the day.

Me: I have no idea. I swear, if this is about the case he’s been working on and he got arrested for hiding the client or some shit . . . I’m going to kill him.

Kristin: Call Heather! Don’t talk to anyone until you’ve talked to her.

I didn’t even think about that. Heather has been a Tampa police officer for a long time. She knows everyone.

Me: Thank you! I’ll grab the kids as soon as I’m done.

Kristin: No worries. We’ll entertain them.

Or Ava will drive Kristin nuts, but she’s usually only the devil for me. She’s fifteen and a load of freaking fun. She knows everything. Hates everyone who is not her father, and thinks I’m the worst person on the face of the earth. Which has made for some lovely family dinners.

Then there’s my sweet baby, Parker. He’s the angel to the demon spawn I birthed first. I know as a mother we’re not supposed to have favorites, but that kid makes it hard not to. He loves me, still thinking I’m wonderful, and I can’t imagine a world without him.

While he was never in the plan, he was the best mistake I ever made.

I push the button to send a voice message to Heather.

Me: Hey, can you meet me at the station? Something happened with Peter.

The roads going this way aren’t busy, and I make it there before Heather returns my text. Shit. I call Peter’s assistant’s cell phone, but it goes to voicemail. Figures. The one time she doesn’t have the damn thing permanently glued to her hand.

I decide I’m just going to have to go in and deal with it. I know where he keeps the extra money in case we ever need it for something like this. I’ll bail him out and then I’m going to beat him with his own torn-off arms.

When I get through the doors, Heather is standing there. “Hey!” I say, relief flowing through me. “I tried to message you.”

“Thank God you’re here. Did you find out what Peter did? I wasn’t sure the protocol on bailing someone out . . .”

“What?” I ask as my throat goes dry. “Like what? I can’t get him out? Did he do something really bad? Jesus Christ! He did, didn’t he?”

Fear starts to fill my body as I wonder what the hell is going on. Heather doesn’t look me in the eyes. Instead, she releases a deep breath and her eyes fill will tears. This can’t be good. She’s not a crier and definitely not over Peter. My best friends accept my husband, but they’ll never forgive him for all that happened years ago.

If she’s on the verge of tears, this isn’t bad, it’s worse than bad.

Heather steps forward. “Danni, Peter was shot at his office earlier today and,” her lip trembles.

I hear the words, but I don’t want to believe them.

“Why am I here then?” I start to step back. “I should be at the hospital!”

“Danielle,” she says in her police voice. “He’s not at the hospital.”

One sentence says it all.

“He’s gone, honey.” She steps forward and I start to crumble, but she catches me. We crumple to the floor as she holds me in her arms. “I’m so sorry. I’m so so sorry. We tried everything. I got the call, I was on scene as soon as I could, but there was no saving him.”

Thank you so much for reading the Prologue of If I Only Knew which is available in audiobook now, and ebook on January 28, 2019! You can preorder below and be sure to sign up for my newsletter to be alerted when it’s on live!

k BB
Ready to find your next favorite read? Discover
📚 Help Me Remember by Corinne Michaels FREE in

Couldn't resist this trend for 📚 Help Me Rememb

📚 Could Have Been Us by Corinne Michaels Free