Defenseless releases on January 19th and is available for preorder on all platforms.

All rights reserved. No part of this publication may be reproduced, distributed or transmitted in any form or by any means including electronic, mechanical, photocopying, recording or otherwise, without the prior written consent of the author.

This book is a work of fiction. Names, characters, places and incidents either are products of the author’s imagination or are used fictitiously. Any resemblance to actual events or locales or persons, living or dead, is entirely coincidental and beyond the intent of the author or publisher. 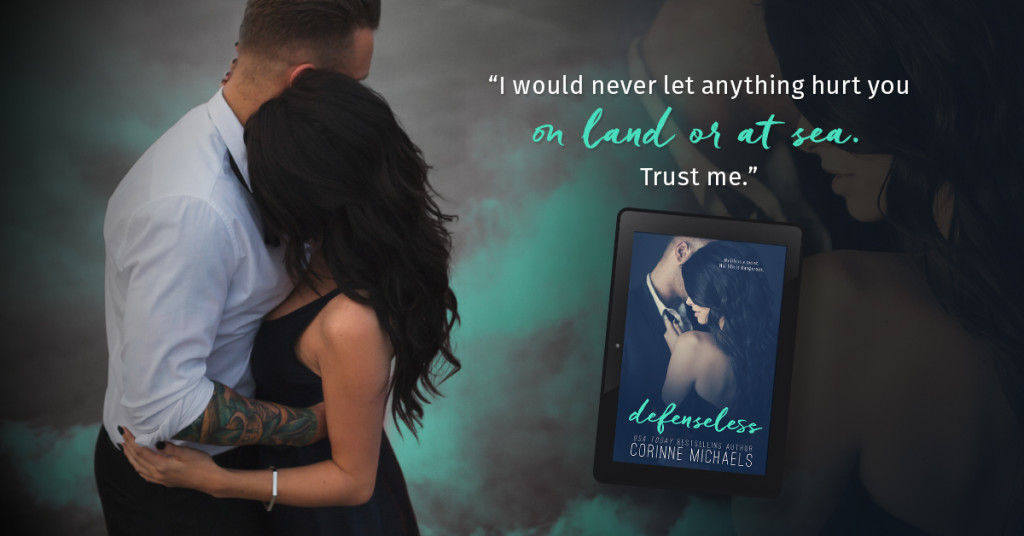 “Everyone locked and loaded?” Liam Dempsey draws our attention. There’s a part of me that wants to slap him, but then I remember: I’m the guest. It would probably be frowned upon.

“Ready,” Jackson says and bangs the magazine into the rifle. “What’s the plan?”

“We have the location where Aaron’s being held captive. We’ll split into two teams, surround the building, and get him out. The helo will be on standby for extract. Muffin, Twilight, you guys will handle meeting with the CIA agent.” Liam lets us know how this will go down.

He’s the big cheese of our small team. Commander was fine with allowing Muff and me to go on the rescue. First, we know what the hell we’re doing; I could be the damn commander at this point. Second, if it isn’t Aaron, we have the best chance of knowing quickly. I know it is, though. The code word that the CIA agent communicated was the one we’ve used for years. She relayed his area and the best way possible to enter the compound. Of course, deciphering her instructions was difficult, and it left us to make plans for the plans.

“Let’s get this shit done and get back in one piece this time, okay Muff?” There’s no hiding the sarcasm in my voice.

“So touchy.” I grin and double-check my gear. As funny as it is, it’s also not funny at all. Jackson Cole was once the leader of our SEAL team when the mission we were tasked with went really wrong. We lost three teammates that day, and all of us suffered injuries both mental and physical. Then we sent Aaron to deal with a lost shipment of weapons and he was killed. Well, possibly not, but still. Each time one of our asses touches down in this fucking place, someone ends up shot or killed. I’d love to be able to forget, but the truth is, I never will. The guys I’ve lost reside in my heart. The memories take hold in all of us, and for some, they torment us. The wondering if we could’ve done something different, remembering their last moments—it’s a heavy burden to carry.

I’ve lost too many friends and too much blood to this hellhole.

“Okay,” Liam says through our earpieces. “Two minutes out.”

Everyone stands, heads toward the back of the plane, and readies for the ride. We’re parachuting in, and there’s a part of me that’s alive for the first time in a while. I live for this shit. The command of the sky, the adventure, the danger—I love it. It’s a part of who I am, and while I don’t regret leaving the Navy, I miss the fun. Being a SEAL was everything to me. I was damn good at it, too. While Aaron and Jackson had no problem getting out and starting Cole Security Forces, I would’ve been buried in my uniform. However, my arm had other ideas and made the choice for me.

Jackson slaps my shoulder. “Ready to be badass again?”

“I never lost it. Unlike you other pussy whipped assholes.”

“At least I get pussy, unlike some shithead who talks a lot of crap,” he mutters under his breath.

“Keep it up, fat boy. You’re starting to earn your call sign again, Muffin.” I pull my goggles down and watch for the light to turn green. There’s no hesitation as I jump out the hatch. The plane fades away as I plummet to, once again, do what I live for.

We all reach the ground safely a few miles from the IED site where this whole mess started.

Liam gives the hand commands as we split into teams of two. If I ever felt like a piece of shit before, it was nothing compared to now. Aaron is possibly still alive and nearby. We didn’t search before, partly because Muff got shot, but I never even considered coming back. They claimed there were no survivors, and we listened.

If it were me, would I be pissed? Fuck yeah, I would. We should’ve looked.

“See that, up on the building?” Dempsey’s voice cuts through the silence.

My eyes dart to where his hand is pointing. I can’t see it clearly, but hanging from the antenna is a red scarf, the go-ahead signal from our contact.

“Charlie better not be fucking us around,” I grumble. I’ve missed the way my body feels right now. Everything inside me is awakened. My mind knows there’s danger and my muscles are tense so I do my best to relax. I can’t be on edge or someone could get hurt. I remember how it felt to lose our teammates on that mission. I remember carrying Brian, Devon, and Fernando’s bodies out. I remember watching the life fade from their eyes. Then to think of all the other drama we’ve dealt with being in the sandbox—this place gives me anxiety.

“She’s on our side. Head in the game,” Jackson snaps as he creeps forward. He’s in the zone. I need to get there before we kick in the door.

As we approach the entrance, Liam comes through with the green light. “Petunia.” His tone is clear. This time we’re using flowers for code names. I liked it better when we used liquor or tobacco . . . more manly. Shows just how much the Navy is breeding pussies now.

Jackson braces his hand against the door, ready to push through, but someone pulls it open first. All of our guns raise, and my gaze locks on the bluest eyes I’ve ever seen.

The woman’s hands slowly raise, and she casually removes the hijab that covers her mouth and hair. “Check out the garden, boys. Petunia.” Her accent is clearly American. “He’s down the hall and knows you’re coming. There are three on guard by his cell. The others are out doing errands. I’m leaving with you, so don’t fuck this up.”

I stand there, staring, unable to form a fucking coherent thought. This is the CIA op? This five-foot-four, drop-dead gorgeous woman? No wonder she gets information. I’d sell my soul if she asked. Her hair is almost black and hangs straight, her eyes are ice blue, and don’t get me started on what I imagine her plump lips doing. I’ve never seen anyone like her. I’ve never reacted to anyone like this before. I want her—any man would—but I want to own her. Every part of my body, especially one in particular, yearns for her. I want to see if her skin is as soft as it looks, if her hair feels like silk, and her voice—I’m done for.

Jackson lowers his gun and then addresses her. “Which door, Charlie?”

“Second on the left. I need a gun.” She puts her hand out.

The need to protect her calls from deep within. “Maybe you should stay out here.”

“And watch you guys get lost? I don’t think so. Gun. Now.” She doesn’t look my way when she replies. She just waits for Jackson to hand her his pistol.

I don’t like this. She may be trained by the CIA, but that’s not saying she can handle combat. “Are you sure you know how to use it, princess?” I ask.

Her eyes meet mine and narrow. Oh, that got her attention. A storm’s raging in those baby blues. She recovers quickly, though, when Jackson places his nine mil in her delicate palm. “Thanks. I’ll let that slide since you obviously aren’t aware of who I am,” she says without taking her eyes off me. “We don’t have a lot of time. Where’s the rest of your team?”

“We are the team,” I reply. Who is this girl? Maybe the CIA needs ten people, but Jackson, Liam, and I could handle this entire thing on our own—the six-guy team we brought is more than enough.

“I’ll lead,” Charlie says and lifts the hijab over her hair.

“We know what we’re doing.” I speak just so she’ll look at me again.

“Wouldn’t want you to get lost or hurt. Don’t worry, I’ll protect you.” Her voice drips with sarcasm. My cock hardens. It fucking hardens on a goddamn mission. I am so fucked.

She opens the door and I push Muffin out of the way. No way is he going to be behind her. Charlie turns to relay a message, and notices he’s not the one following. Her eyes roll, she holds up two fingers, and then she points to the room. The way her ass sways is hypnotic. I lock down the sexual urges flowing through me and focus. The two men trailing me let off two silent shots and then return to following us. We slink through the dirty hallway and come face to face with another guard.

I don’t have a moment to take the sight. Charlie doesn’t hesitate. No more than a breath passes before she raises the nine and shoots him in the head.

This woman is going to be mine.

She turns her head to face me and lifts her lips. The words that come from her mouth go straight to my groin. “Don’t be afraid to pull the trigger next time, princess.” Charlie’s eyes glimmer, and I know right then that this woman will not be owned, but she sure as shit will own me.

k BB
Ready to find your next favorite read? Discover
📚 Help Me Remember by Corinne Michaels The enti